REGINA — Saskatchewan Junior Hockey League players have been in limbo ever since their season was paused in November 2020.

Now, with a decision about return to play approval on the horizon, players are ready for some certainty after almost 12 months of navigating restrictions, pauses and cancellations.

Zach Cain, an 18 year-old forward on the Melville Millionaires, was gearing up for his first full SJHL season in 2020-21.

The Pilot Butte-born winger said the league getting approval to play for the fall of 2020 made things feel a bit more like an ordinary hockey season.

“It was awesome. It was just like a sense of normalcy again,” Cain said. “It was my first year of junior, so it brought me back to the minor hockey that’s all I’ve known.”

Since the SJHL paused its 2020-21 season on Nov. 25, 2020 due to pandemic-related restrictions implemented by the Government of Saskatchewan, players have had to make some difficult decisions to keep busy.

“It’s tough, especially with the not knowing what to do. Whether you should commit to getting a job or something, a lot of us are up in the air about that. Or maybe taking some classes to try and get some of those out of the way before becoming a full time student,” Cain said. “The uncertainty is what sucks the most for us.”

“When we found out that the season was cancelled, it was pretty disappointing, because we were just starting to figure things out and get into the groove of things,” Birnie said.

Birnie, a 19 year-old from Weyburn, is hoping he can turn his time in the SJHL into a university scholarship or professional career.

“To get a university degree and be able to play hockey at the same time has always been a dream. You talk about going overseas and playing hockey too, not many people get the opportunity to do that. If I was fortunate enough to do that I would definitely take that up,” Birnie said.

However, the paused season has made it difficult to showcase his skills to scouts.

“Your 19 year-old year is a big year for, not only development but for guys seeing you and getting that opportunity to watch you play,” Birnie said. “Everyone is missing out on a big year.”

Birnie has one year left of SJHL eligibility left and will return to the league for his final season in 2021-22. On the other hand, current 20-year-old players may have had their final opportunity to earn a scholarship, if the season does not resume.

With questions about whether or not the season will resume, opportunities are coming at a premium for any 20 year-olds that have yet to secure a scholarship for next year. Canadian universities have granted their players an additional year of eligibility, which further limits open roster spots.

Despite the rule changes at the university level, SJHL president Bill Chow said the league is not interested in extending eligibility for players currently in their 20 year-old year.

Whether the SJHL returns to play or officially cancels the current season, both Braden Birnie and Zach Cain agree some certainty will be welcome after a turbulent year.

“Just a decision either way, just to end the uncertainty, whether we can start preparing for next season,” Cain said. 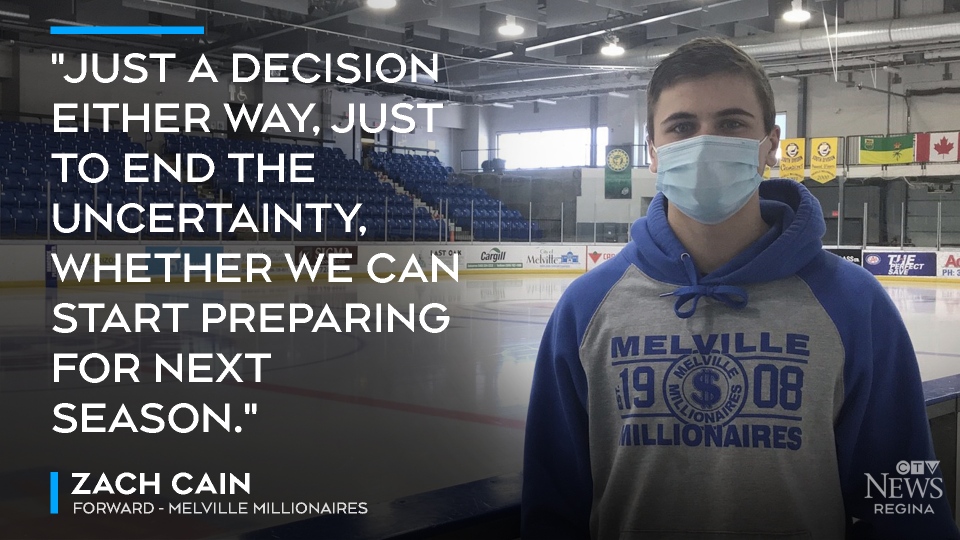 “It’s just frustrating not knowing when it’s going to end and when were going to be back to a normal set life,” Birnie added.

As COVID-19 vaccines are rolled out across Saskatchewan, some hope remains for a more normal season in 2021-22.

Both players remain optimistic for next year and will look to make an impact on their teams, while trying to keep their options open for after their junior careers.

“If that means have no season this season and just wait until the next one I’m going to do that, and I’m going to try and play my last year and see where it takes me.”