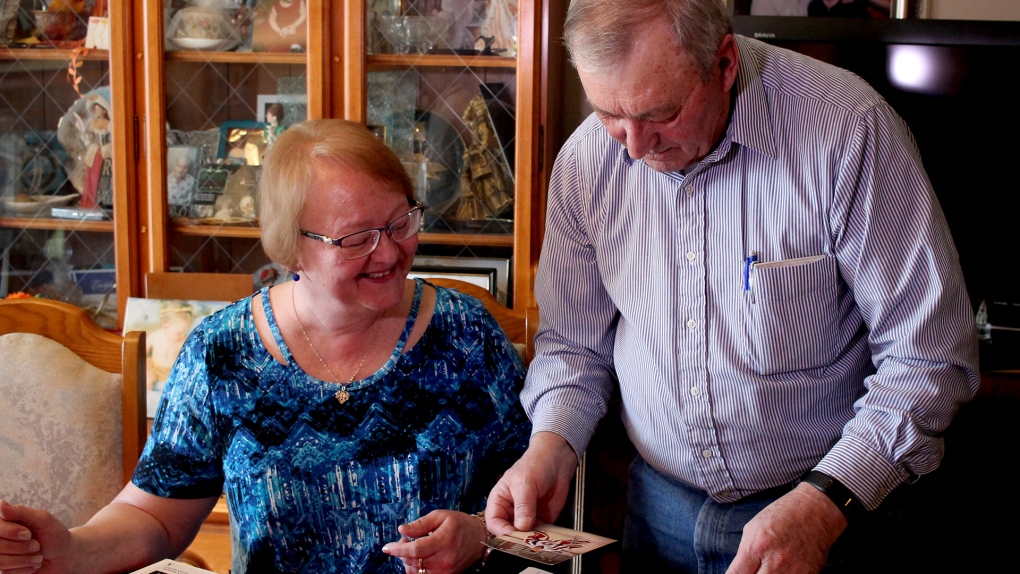 Ken and Lorie Somogyi sit and look over photos of past Melville Millionaires teams. The couple has been billeting Melville athletes for nearly two decades. (Brendan Ellis/CTV News)

MELVILLE — Ken and Lorie Somogyi have been a key piece of the Melville Millionaires hockey team for nearly two decades.

On the surface, the important parts of a hockey team are its players, coaches, trainers and managers, but at the core of many junior hockey teams across Canada are the billet families.

“We usually had at least one, sometimes two, even three billets,” said Ken.

Billet families house junior athletes who have moved away from home to pursue their sport.

The Somogyis have been putting up players for the Melville Millionaires hockey and baseball teams since 2003. The team was in need of more billet families and it seemed like the perfect timing for the now retired couple.

“They were always looking for billets, somebody to look after the boys,” said Ken. “We had four boys, and they were moving out. We had room to home them so we took them on.”

The Somogyis are homegrown supporters of the Millionaires, with Lorie growing up in town, and Ken hailing from Willowbrook, around 30 kilometres north of the city.

The couple said billeting for the Millionaires has given them a more personal connection to both the community and the team.

“It’s much more fun cheering for somebody you know. They’re like your kids. I have my clappers, a lot of people know I clap my clappers at games so they don’t want to sit around me,” Lorie said with a laugh.

‘Home away from home’

SJHL players become idols and role models within their communities, but off the ice these players are 16 to 20 year olds, sometimes leaving home for the first time.

Millionaires’ defenceman Dylan Wells was traded to Melville at the beginning of this season, moving away from his home province for the first time after spending one full season in the Alberta Junior Hockey League.

“It’s pretty stressful moving into a whole new environment, new people, you don’t know them. But you just want them to welcome you with open arms and just be there for you, support you,” said Wells.

Wells and teammate Kolton Leslie are both in their first season with the Millionaires and moved into the Somogyi’s home in Melville.

“I’ve had three different billet families now, all of them are different and all of them I feel like I’m at home. Whether it’s who you’re living with, the food, just something reminds you of home,” said Leslie Dylan Wells (left) and Kolton Leslie (right) have been billeting with the Somogyi family since they joined the Melville Millionaires for the 2019-20 season. (Brendan Ellis/CTV News)

The Somogyis spent their lives around hockey rinks, with four sons all involved in sports growing up. Now that they have all moved out, the years of Millionaires players coming through their home have given them reason to continue to support their hometown team.

“We take these boys in as our own boys and we go there to watch and cheer them on,” said Ken.

Over the nearly 17 seasons the Somogyis have been billeting Millionaires, their house has been full for almost the entire year.

After hockey season finishes and the players go back to their homes for the summer, Ken and Lorie say they would usually have just a few weeks of downtime before the baseball players arrived.

While most players come from nearby to play for the Millionaires, more recently many have been coming to south-eastern Saskatchewan from around the United States, or even further abroad.

It gives the couple a chance to learn about life elsewhere, and show off their lifestyle on the prairies.

“It’s nice to meet people from all over and show them the way we live here and that Melville is a nice city and a good place to grow up.”

After having numerous athletes in their home for nearly three quarters of the year, the numbers of bodies passing through the Somogyi house have accumulated.

The couple has a box filled to the brim with recipe cards, with the contact information of every player that has come through their doors. Lorie said she has lost count of how many players have come and gone over the years.

“Between hockey and ball players it would be I would say over 100.”

The couple agrees housing the many years of Millionaires has been fun, and just like parenting their own children, getting to know each new person passing through their home comes with a learning curve.

“Like having kids, they’re all different,” said Lorie. “You just have to learn how to go with the flow and I think they learn that too.”

Ken and Lorie have learned a bit more about parenting trying to adapt to the various personalities they have met over the years. But they also want their billets to take away some lessons from their time spent as part of the Somogyi family.

“Hopefully they take some of the things that we’ve tried to teach them, to go on in life,” said Ken.

‘You have the whole team behind you’

The Somogyis service to the Millionaires does not end with billeting. Both of them also volunteer for the team in individual roles outside of the home.

Ken has been driving the team bus for as long as they have been involved with the team. He has spent many road trips with the Millionaires, whether it’s just a short drive up Highway 10 to Yorkton, or spending hours on the road getting the team to North Battleford.

“You’ve got lots of responsibility there, you have the whole team behind you,” said Ken. “Road conditions can be treacherous, you have ice, blizzards, all that kind of stuff.”

Ken Somogyi greets Melville Millionaires players as they board the team bus before a road trip to Yorkton. (Brendan Ellis/CTV News)

Lorie, who works for Horizon Credit Union, rallied her company to work the gates taking tickets for all of the Melville home games, after the company got the naming rights for the new arena.

The pair, now in their 60s, no longer billet for the baseball team to spend time with their new grandchildren. Although they have cut back, they have no immediate plans to stop billeting hockey players.

“It’s something we can give back with billeting, giving back to the team and to the town, offering our home to billet these boys. If it wouldn’t be for us, then where would they go?” said Ken.

“It always amazes me how these kids come from all these places to play for the Millionaires. I think we do our little part to try and make it an enjoyable [experience],” said Lorie.

The Millionaires organization continues to look for more families to help out billeting during hockey season, but value the years of service the Somogyis have given to the team and the city.

Ken and Lorie don’t know how much longer they will welcome players into their home, but they are still happy to continue doing what they can for the community of Melville for the time being.

For the players currently living with them, Wells and Leslie said they are looking forward to another year of Millionaires hockey, and hope to be back in their Melville home away from home next year.